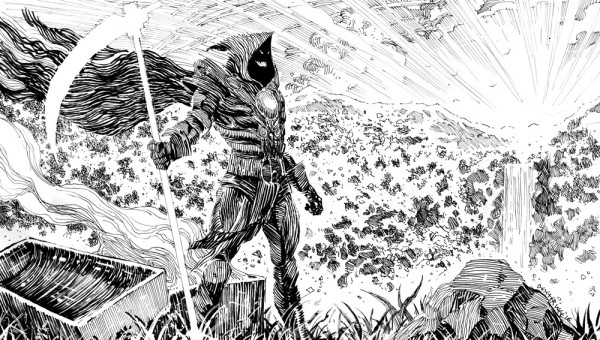 Part 1 of this story appears at the end of Ides of March, available now on ComiXology.

The first observation I made upon exiting the transfer pod was that gravity was stronger here than on Utopia IX. I was surprised to find I knew exactly how much stronger. Gravity on Utopia IX was 9.3 meters per second squared. Here it was 9.8 meters per second squared, roughly 5% stronger. I then realized the B.S.D. must be feeding its sensor readings directly into my cerebrum. The difference in gravity was enough to make me feel weak, as if recovering from Parallaxian flu. The suit soon re-calibrated, and I felt strong again.

When the pod lid opened I had expected to emerge into some kind of Hellscape, littered with the remains of destroyed Sentries and populated by escaped prisoners. Instead the world I found myself on was fresh. New. Untainted by the hands of man.

It was to be exile then.

Utopian justice had a long, winding history. On Utopia I, according to historians, suspected criminals were once judged by a tribunal of mystics who would determine guilt or innocence by communicating with the spirit world. Hard to imagine how a species so foolish ever survived.

On Utopia VII, trials were entirely automated, and justice was entirely punitive. Robotic judges could access data from all over the planet, including nearly omnipresent surveillance. With this they determined who was guilty, and sentenced them to punishments ranging from public humiliation to public execution. That system worked well, in my opinion. I even incorporated the concept of a judgement algorithm into the B.S.D.

There was a flaw in the system, however. The judgement software became corrupted, and determined that everyone on the planet was guilty, and sentenced everyone to execution. This, in the end, caused the collapse of Utopia VII.

No longer trusting computers to handle the justice system, Utopia VIII decided to crowdsource the job of prosecuting and sentencing criminals. The court system was converted into an ongoing reality TV show, where viewers could determine who was innocent, who was guilty, and what their punishment should be. This caused endless controversy, as known killers, con men and other scoundrels would sometimes charm the viewers enough to avoid conviction.

One charismatic con man leveraged the notoriety he gained from his trial to run for, and be elected as, Grand Chancellor of Utopia VIII. He enjoyed the trappings of power, but not the burden of governing, and before long he had turned over nearly every function of government to the reality TV industry. Chaos ensued, the economy collapsed, and people became increasingly bloodthirsty as famine began to take hold.

Utopia VIII consumed itself in a blaze of hatred and disregard for Uhman life. At the dawn of Utopia IX our civilization decided that we could never again let such a disaster occur. It was then that the sacredness of life, especially Uhman life, became entrenched in our culture, and our system of justice transformed from one of punitive justice to one of restorative justice.

This, I reflected, made my banishment something of an anomaly. Prison planets typically focused on rehabilitation, with the hope of eventually re-integrating the prisoner back into society. The Acting Chief Councilor must have decided that one such as I was too dangerous to attempt such a thing. So I was not to be rehabilitated, but kept away from the world I so loved.

I wandered for a time, seeing trees older than Utopia IX, flowers of colors I’d never seen in nature, and creatures beyond my imagining. My mind reeled from the beauty of it all. If only my little Daisy could have seen it. It was a greater visage than the Hanging Gardens of Eden, the center of Utopia IX’s capital city, Xyon.

What great work went into that city and its garden. Eden was to be the quintessential achievement of Utopia, a celebration of life. Specially commissioned by the first Council of Nine, the greatest artist in all the known galaxy, Tobias Cyrk, designed a place of tranquility, light, and beauty. It was the envy of worlds.

My daughter was young when we walked among the flora of Eden, and I would delight in her joy. She loved the birds, the flowers, trees, and most especially, the fountains of the garden. How she’d laugh whilst dancing in the water, heedless of getting soaked.

On those days, Eden felt like it was my whole world, but Daisy was always the center of my universe…

A bird, feathers all colors of the rainbow, interrupted my reverie as it came to land on the branch of a nearby bush growing what appeared to be fruit. I looked upon it. It looked upon me. My awe slipped from my lips, “Daisy, if only I could see the light in your eyes as you gazed upon this beautiful creature.”

“Beautiful creature”, the bird replied to my astonishment. I’d never known an animal which could mimic the Uhman tongue. I marveled.

The bird ate its fill of the strange fruit and flew off to play in the air. It was as though it could also read my mind and delighted in the memory of my little girl, dancing as it did on the wind as she would in water. I followed it through the trees as it hopped and flew and danced. I had not felt such joy in recent memory. Thus it was I was found myself prancing around the jungle like a little boy while wearing a biomechanoid death machine, totally unaware of the outrageous spectacle I must have made.

Fortunately for my own sense of dignity this spectacle was observed only by the multicolored mimic-bird. For its part, the creature seemed content to let me continue following it through the jungle, almost as if it were trying to lead me somewhere. I did not truly think that the bird were trying to guide me anywhere, but I had no map of the land, nor any specific destination in mind, so I followed.

I wandered for days. The mimic-bird seemed to follow near a stream, from which I could drink, and the jungle was plentiful with edible fruit and wild game. Yet I found I did not need to eat, as the fully charged B.S.D provided me with more than enough energy. So I left the animals to their own wanderings.

If not for the B.S.D. mapping every step I took, I’d have gladly forgotten about the pod. I had traveled more than a few hundred kilometers since freeing myself. I thought on how foolish those men who banished me to this paradise were. I could easily live out my days here and never have a spiteful thought again…

It was I who was the fool.

The mimic-bird came to rest on a large vine that creeped up the side of a large smooth cliff face. From a distance my eyes had interpreted this as a natural rock formation, but it was not. Up close I could see through the tangled vines that the surface was too smooth and even to be natural. How could I have been so foolish as to think this world untainted. The revelation jarred a lost memory.

“I… do hereby banish thee to the planet, Earth!”

These words of the Acting Chief Counselor returned to me. The counselor knew this planet. He called it primitive, yet knew it had a name.

Looking at it now, I could see it all. The structure towered over me as if I were at the base of a mountain. I cursed the men who had built it, frightening the bird with my outburst, “DAMMIT!”

He flapped away mimicking my word, “Dammit!”

I saw now, markings in the stone from behind his perch. I engaged the enhanced optical sensors of the B.S.D. to examine them closer. The sensors were capable of estimating the age of most materials, but they could not get a reading on this rock. But my own eyes told me the markings where old. Perhaps a millennia or more had passed since they were carved into this ancient stone. Yet, I recognized them. Old as they were I knew them. Utopian, but not of my world.

Not IX. Not VIII. Older still?

Perplexed, I moved along the structure. It was a wall, a city wall not unlike that of Xyon. Built as a show of ingenuity more than for battlement. My heart stalled as I came to an opening, an unmistakeable archway. It was the archway my daughter and I passed through during our walks among the Hanging Garden of Eden. Sight upon sight identical to the one in Xyon!

My first thought was of the mimic-bird, though I’d not spoken the word. Then from behind me came again, the voice of a man, “Welcome to my garden, Doctor.”

I turned, my hand instinctively reaching for my weapon. I saw a man whose face I recognized from the historical archives shared with us in grammar school. The great artist, commissioned by the first Council of Nine of Utopia IX, who had designed the Hanging Garden of Eden, now stood before me. It was indeed his garden.

“What is this place?”

“Ah, you have questions? I have answers. I am Tobias Cyrk and this is Utopia VI, also known as Earth.” 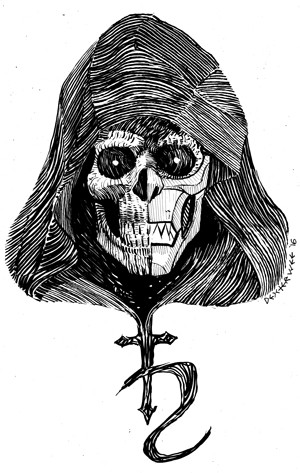