What exactly is SHAM? An Ontological Meditation 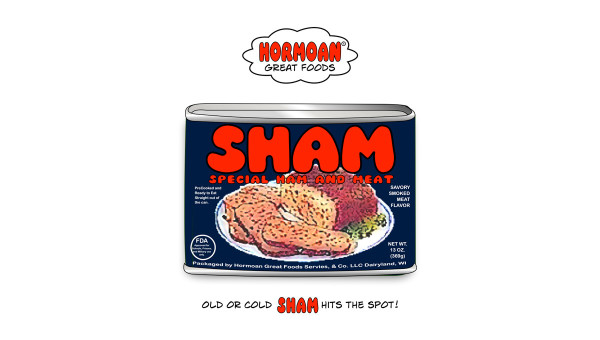 What exactly is SHAM?
An Ontological Meditation

I consider each and every purchase I make to be an important political statement. As you might imagine, when the evil corporate goons at Amazon commandeered Whole Foods I was devastated. I knew I could no longer shop there in good conscience. In what can only be described as the ultimate nightmare scenario, I’ve been forced to search for new places to buy groceries.

Most food I’m able to source locally from farmer’s markets or community gardens. Non-consumables I can get at Trader Joe’s but even they don’t carry my favorite brand of low-sodium vegan pseudo-salmon. So I’ve been forced to venture into the less ethical retail stores and let me tell you, I’m horrified at some of the products I’ve encountered.

For instance, did you know that they sell some kind of supposed cheese in a spray can? I’ll have to pay my life coach overtime to work through the existential despair I’ve been feeling after spending 20 minutes in a Kroger. Of all the consumer horrors I witnessed the one that churned my stomach the most was something called SHAM.

What is SHAM? That’s the question that’s been plaguing my thoughts ever since I first encountered the stuff. The label claims it stands for “Special Ham and Meat”. But what is it, really? What makes the ham “special”? What kind of meat is the “meat”?

This is all complicated by the fact that there are many different varieties of SHAM. Among the flavors they offer are banana, bacon and olive, bacon and banana, carrot and egg medley, and chocolate. I threw up a little bit in my mouth just typing that.

A few things come to mind. First would be that SHAM is defined by its manufacturer, Hormoan Foods. I did some research on Hormoan. Did you know that they used to offer home delivery? Then one of their delivery trucks ran over some dude in Arizona and the service fell out of popularity. The term “Hormoan hash” became a colloquialism for road kill in Arizona.

Anyway, where was I? Oh yeah, so it would seem that whatever Hormoan Foods puts in its blue cans becomes SHAM. So is it the can that defines SHAM? I don’t think so. If I were to put my veggie salmon into a discarded SHAM can (not that I would ever commit such a blasphemy) it would still be veggie salmon.

The only conclusion left to me is that SHAM is defined not only by its confinement to the blue can but also its historical context. SHAM is a sociohistorical construct, available in a variety of flavors.

With that question finally answered, as well as I believe it can be, I’m finally able to return to my quest for an ethically suitable place of purveyance. Wish me luck!