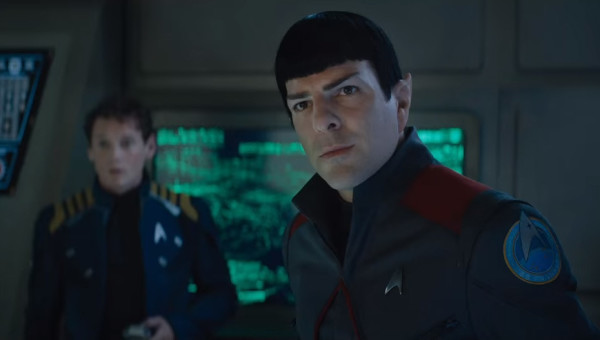 The trailer for Star Trek Beyond came out earlier this week. As you might expect, it sparked a flurry of commentary, including a lot of complaining, on social media. I came of age watching Captain Kirk at the movie theater, and Captain Picard on television. A lot of my love of science fiction comes from watching Star Trek. So, I want to explain why I disagree with some of the detractors, and talk about how I view the sci-fi action genre as a writer myself.

It seems I am in a minority, at least within the confines of my social media network. I enjoyed both of the “New Trek” movies, and I’m excited to see the third. You can accuse me of being one of the drooling idiots responsible for the dumbing down of American cinema, if that makes you feel better. Go ahead, I won’t take it personally.

Nostalgia can be a powerful tool for getting people into the theatre, but if you aren’t careful it can also cut off your fingers. The more people love a creative work, the more difficult it is to make them happy when you extend that work. This is certainly why The Phantom Menace is one of the most hated movies ever, rather than just a second rate forgotten sci-fi action flick.

I think nostalgia also plays a big part in the negative reaction to the Star Trek reboot. I’m not saying these films don’t have problems. You can insert your own lense flair joke here. But the recurring theme I’ve seen in most of the criticism has more to do with the sentiment that these new films are “not Star Trek”, than complaints about plot holes or poor storytelling.

Case in point, TNG actor Wil Wheaton said this of the new Beyond trailer:

I saw the weirdest trailer today. It was for a generic science fiction action movie, but it was all dressed up in Star Trek costumes.

Look, I get it. Longtime fans feel like Paramount has taken an intellectual work they dearly love and turned it into a soulless popcorn movie just to make money. And they aren’t entirely wrong. Some people long for the Star Trek of their youth. Whatever it is, the reboot is certainly not that.

That doesn’t mean it’s necessarily bad, or that it’s “not Star Trek”.

Wrath of Khan is arguably the most beloved Star Trek movie ever. I hate to break it to you, but it contains only a cursory nod to ethical dilemmas or philosophy. Yeah, they’ve got the whole Genesis Device thing, but it’s mostly just a plot device. The focus of the film is a space battle between Kirk and Khan. It's basically Das Boot in space.

The Voyage Home is a light hearted comedy, that just happens to involve time travel. Yeah, there’s the whole “save the whales” thing, but I wouldn’t consider it serious allegory. Undiscovered Country is a political thriller. I love all of these movies, and I don’t think anyone would argue that they were “not Star Trek”. Yet none of these films had the deep cerebral qualia that many fans seem to think made Star Trek what it was.

The TV shows were where Trek most often delved into deeper thinking, not the movies. And when the movies tried, it did not go well. The Final Frontier was a hot mess, and long regarded as the worst film of the series. Star Trek the Motion Picture had probably the hardest sci-fi plot of any of the films, and it’s so dull it’s barely watchable.

Don't get me wrong, I love deeper meaning in my sci-fi. I'm always thinking about subtext and philosophy when I work on Black Suit of Death, or anything else I write. I love to wrestle with moral quandaries while there's some insane action going on. I like to use wacky sci-fi scenarios to explore the human condition.

But I don’t think all sci-fi, or all Star Trek, needs to do the same thing.

Philosophical pondering always seems to drag the Trek movies down. The best Trek films are those written as sci-fi action, with a focus on the characters. Whether or not the Abrams reboot achieves that or not is debatable. But I don’t think it’s fair to say it’s not Star Trek because it doesn’t perfectly match some nostalgic ideal.