Of Algorithms and Engagement

Engagement is one of those buzzwords you’ve probably heard floating around, especially if you have the slightest interest in social media marketing. It’s a metric used by some marketers to evaluate the health of their online presence. Basically, whenever you “engage” with something on social media, whether it’s liking a post, commenting, retweeting, etc., those are examples of engagement.

In order to engage with your audience, they have to see your content. You can have the most clever meme in the world, but if only 3 or 4 people see it, it’s not likely to serve you in any perceivable way. Before you can get engagement, you have to get “reach”.

Reach comes in 2 flavors: organic and paid. In case you weren’t aware, organic reach for Facebook pages is abysmal.

We have over 530 likes for the Black Suit of Death Facebook page. Our average organic post reach is just 102 people. At close to 20% that doesn’t sound like a very good rate, but we are actually doing spectacularly well in comparison to the average, which is estimated to be around 6%. 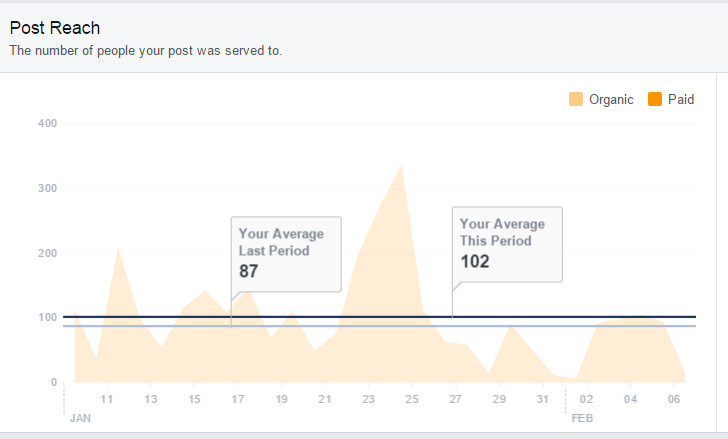 When we post a link, it will reach somewhere between 30 and 60 people. Photos are better, with roughly double the reach, but still not great. Sometimes takes days before sometimes takes several days to get to that level of "reach". For example, we posted a link 2 days ago that has reached a grand total of 6 people. If you are promoting something time sensitive like a Kickstarter launch, you can’t wait several days for people to see your link. 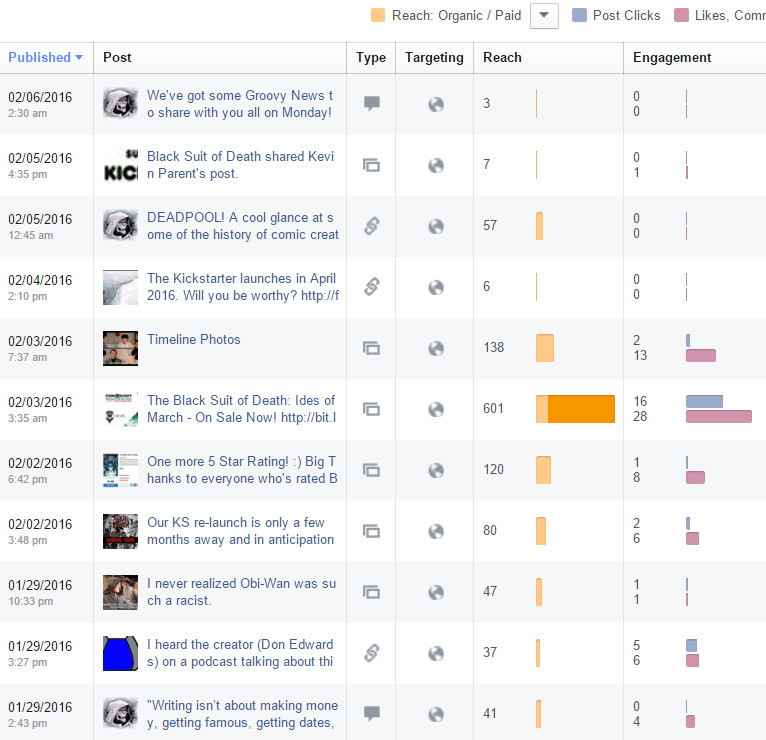 This is not a "flaw" so much as a "feature". That is to say, it's the exactly how Facebook intends it to be.

Just like the B.S.D. uses an algorithm to determine who is worthy of Utopia, Facebook uses an algorithm to determine what content is worthy of showing up on your timeline. Instead of your timeline just showing you everything from your friends and the pages you like in the order it was posted, Facebook shows you the content it "thinks" will be most relevant to you, based on who and what you interact with the most. Comment on or like a particular friend's posts all the time? Their posts will get more priority when Facebook sorts your timeline.

You can mitigate this somewhat by switching your news feed to "Most Recent", but that is somewhat misleading, as it still filters out quite a bit, showing you the "most recent top stories". Content from pages is filtered more heavily than content from your Friends list, which is why "organic reach" is so pitiful.

Facebook will tell you they do this to provide a better user experience, so you will see more content that is relevant and interesting to you. That's sure nice of them, but you'll note they offer no way to bypass this "feature" and see a truly unfiltered view of your news feed. They will also tell you they aren’t doing this to make more money, but in the same breath they will be sure to extol the value of running a Facebook ad.

Of course Facebook wants to make more money. They are a business, and that’s what businesses do. They are counting on suckers like us to use their advertising platform, spending 5 bucks (or more) here and there to "boost" a post from our page, so that our hard-earned fans will actually see it.

It's super frustrating to build an audience and then have Facebook hold it for ransom, but such is life. As an advertising platform, they do offer a value. For one thing, they provide a ridiculous level of targeting. Facebook’s users are the product, and they know everything there is to know about their product. Want to advertise to 35 to 40 year old women interested Star Trek? You can do that. Is your target audience 18 to 30 year old men who like romance novels and ramen nodles? Facebook knows who they are.

Sadly, that may be about to change.

If you use Twitter, you’ve probably noticed them trying to shake things up in recent months. They changed “favorites” to “likes”, added a “moments” feature, and announced they were considering dropping the 140 character limit for Tweets. The reaction to these moves among users has ranged from disinterest to outrage.

A lot of Twitter uses despise Facebook, and are not happy about their beloved social media platform trying to be more like the competition. The users have been shouting, “Why are they trying to fix something that isn’t broken?” The simple answer is that Twitter actually is broken. At least, from a financial standpoint.

Twitter is an internationally recognized brand with more users than the populations of most countries. That’s certainly impressive, but they still haven’t been able to figure out how to turn a profit. All of the recent changes have been aimed at making the site more user friendly to hopefully attract more users, and thereby increase revenue. Whether they have accomplished that is debatable, but that’s the reasoning behind all the changes.

Last Saturday Buzzfeed reported that Twitter is going to start filtering news feeds using an algorithm to push the most relevant content to the top, similar to what Facebook does. Twitter exploded into the usual cacophony of outrage, pushing #RIPTwitter to the top of the trending list for at least half of the day. It created such a stir that the CEO of Twitter had to speak up and try to calm everyone down.

Hello Twitter! Regarding #RIPTwitter: I want you all to know we're always listening. We never planned to reorder timelines next week.

This is reassuring, but you’ll notice the disclaimer on the end. They’re not planning on making these changes “next week”. Jack went on to try to assure everyone that Twitter wasn’t going to ruin the timelines, but one of his tweets is rather telling:

Twitter can help make connections in real-time based on dynamic interests and topics, rather than a static social/friend graph. We get it.

While insisting that the timelines will remain “real-time” he’s also saying Twitter will “help” based on “dynamic interests and topics”. That sounds an awful lot like just the sort of algorithmic resorting users are railing against. Jack’s assurances aside, Twitter has been testing this “feature” since December, so I’m guessing they’re pretty serious about adopting it in some form or another.

If they go through with this plan, and I would be surprised if the didn’t, no longer will everyone have an equal shot at having their content seen by their followers. Just like Facebook, I’m sure Twitter will claim this move is aimed at helping users see content that is more relevant to them. And just like Facebook, I’m sure that they will push the use of their ad platform. Want to make sure your content is “relevant”? Just buy a Twitter ad.

Here’s the problem: Twitter ads suck. By almost every metric, Facebook is the better advertising platform. Facebook gets high marks for the effectiveness of its targeting, while research shows that over half of Twitter ads are irrelevant to those who see them. Facebook has mastered the fine art of Orwellian data collection, while Twitter is still playing with finger paints.

If Twitter starts taking your followers hostage, it’s unclear whether or not paying the ransom will really give you access to them, or if you’ll just be wasting your money.