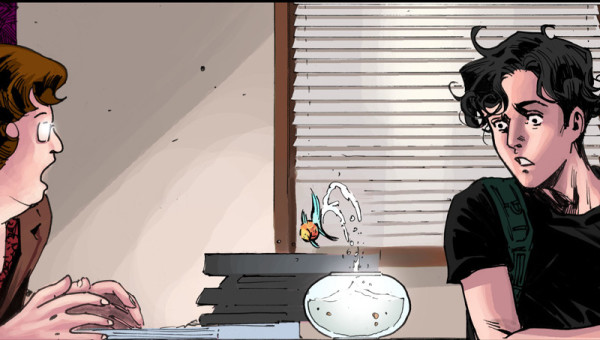 Dear reader there are big doings afoot at Warrior Innkeeper Creative, and it’s high time we fill you in on the latest.

I am happy to report that the inks for Black Suit of Death #1 are nearly complete. With each new page Dexter sends over we fall in love with this book just a little bit more. Kickstarter backers have already been given a glimpse of these. Bryan is also knocking it out of the park with colors, and we are still on track to have the book completed on schedule.

The comic which started it all is finally, truly complete. It may be the 4th Edition but for us, this is the comic we wanted to make all those years ago, if only we had been as skilled & as knowledgeable as we are now. We’ve been fortunate enough to add a new cover by the wonderful Brett Weldele (The Beauty, Surrogates) as well as a new short story in prose! Black Suit of Death: Ides of March 4th Edition is now available on ComiXology and will see print this fall alongside the release of Black Suit of Death #1.

A great deal of world building has gone on behind the scenes, much of which simply cannot fit into the comic. We’ve written a lot about the strange universe we’ve created, as a way for us writers to build a deeper understanding of our characters and the world they inhabit. However, this was never meant to be just for our benefit. So we’ve decided to share some of this expanded universe with our readers and have created a series of short stories that explore events outside (but related to) the main comic series.

We will be publishing additional stories in future issues of the ongoing series as well as here in our short stories section. We are so grateful for all the support our readers have given us, that we feel a small sense of duty to keep creating content for those who want it, and since us writers want it too, there’s a good chance we’ll keep creating it no matter what.