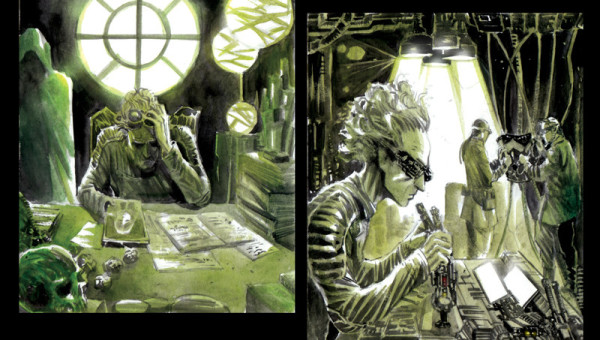 Super excited for my first day as a lab assistant for Doctor Philo Seitsan. He’s a well respected figure at the Ministry of Science and I’m sure I’m going to learn a lot. I have no idea what happened to the previous lab assistant. Rumor has it they were only at the lab for a few months. Why would anyone give up such a great opportunity?

The other assistants and I are kept in the dark about just what Doctor Seitsan’s project is all about. We’re just supposed to follow his instructions and maintain the lab equipment. I’ve never worked under such strange conditions. Still, this is very cool.

When I arrived at the lab this morning I found an unattended flame under a flask of unidentified liquid. Seitsan claimed it was a new liquid nutritional supplement he was developing but it smelled like death. I asked him about the stench and he said it was for canines and they would appreciate the smell.

I caught a glimpse of some of Seitsan’s schematics. I still can’t grasp what it is he’s working on but I can tell biomechanics are involved and it’s creepy as hell.

Jones dared me to drink some of Seitsan’s mystery liquid. I never could turn down a dare, so now my tongue feels like old shoe leather and my guts are twisted up like a pile of fishing nets.

Seitsan still won’t tell me what was in that liquid, but he insists I will “most likely survive.” I am not encouraged. The Ministry of Science safety advisory committee will hear about this as soon as I can properly speak again.

The safety committee has scheduled a suprise lab inspection for the end of March.

Seitsan is presenting his project to the Council of Nine on the 15th! I’m still kind of mad about the whole toxic mystery liquid thing and I still have no idea what he’s actually working on but I admit I’m pretty excited to be part of anything that will be presented in the Tribunal Hall!

Tomorrow’s the big day! I was amazed that Doctor Seitsan asked me to go with him to assist with the presentation! I’ll finally get to find out what he’s been working on.

I can’t even process what I’ve just witnessed.

Seitsan’s project was an abomination. He’d constructed a prototype of a device designed to harvest people for energy. He called it a Black Suit of Death.

The Council of Nine was outraged. They tried to banish him to the Mines of Xarcon and then he put the Suit on and just started killing everyone. I’m lucky to be alive.

In spite of all he’s done, the Council of Nine still would not sentence Seitsan to death. Instead they’ve banished him to the barbarous hell planet known as Earth. I watched them launch him toward his exile today. It felt like closure.

Time to start looking for a new job.